Last April I hit a milestone age. Actually, every age over 25 is a “milestone age” for me, considering the fact that I still feel like twelve year-old/seventeen year-old/twenty two year-old Shawna on the inside (depending on the day).

Nevertheless. Last April I turned 45, which in grown-up years means that each morning I get out of bed a little more carefully and that every routine doctor’s visit leads to more frequent lab work-ups or trips to specialists’ offices “just to be safe.”

It also means that a couple of weeks ago, I casually mentioned to my family that I thought I maybe had “some sort of eye disease,” as every time I sat down to read something I kept having to navigate cloudy splotches, making it more challenging to read and almost always ensuring that I would need a quick (read: two hour) nap afterward.

My family members looked at me with a mixture of horror and concern, their mouths hanging open, until my husband cleared his throat and said, “You ever try reading glasses?”

READING glasses! Of course. I needed reading glasses! I didn’t have glaucoma! Or cataracts! Or some sort of weird eye-cloud ailment! (Thankfully, he had approximately eighty cheap pairs of reading glasses laying around the house that I could try just to be certain.) Suddenly, with a simple change of lens, my vision became clearer. What a concept!

I kid–kind of. But to be sure (and to pivot somewhat clumsily), much of the world, and how it can be successfully navigated, is not designed for anyone beyond who what feminist and disability scholar-author Susan Wendell calls a “‘paradigm’ citizen”–one who is “healthy, non-disabled, young but adult, shaped according to cultural ideals, and, often, male.” In a chapter from her book The Rejected Body (1996), she writes: 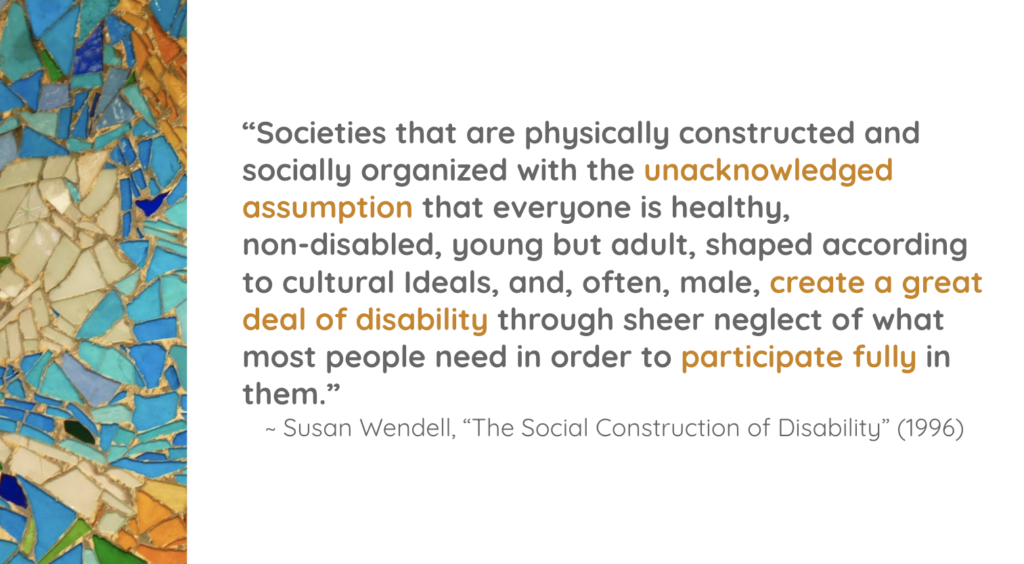 Similarly, our system of schooling, and how it can be successfully navigated, is not designed for the most vulnerable among us–vulnerable because of who is most often centered when making decisions that affect our most powerful institutions. If I were to remix Susan’s quote through the lens of an antiracist educator, in fact, it would read something like this: 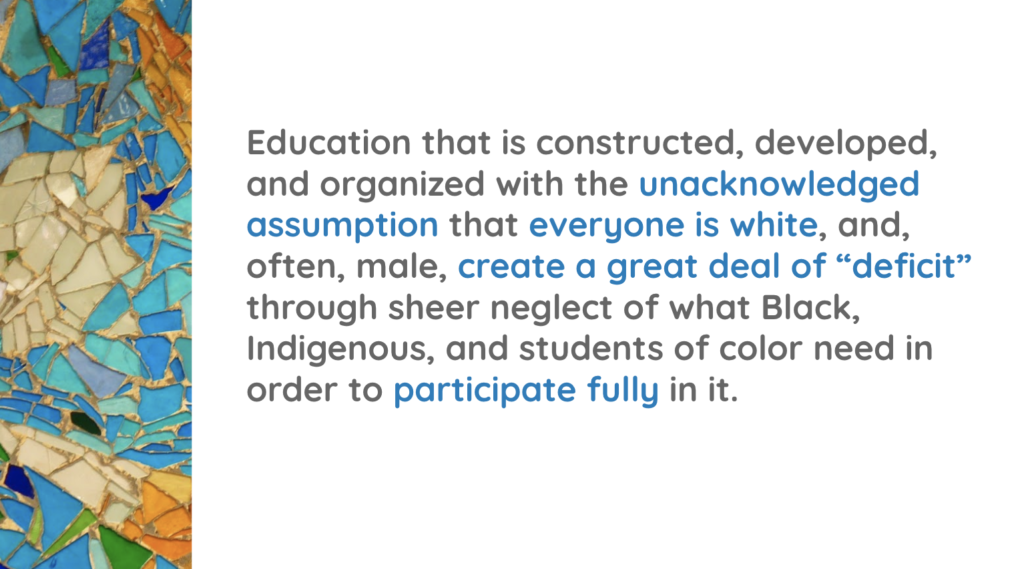 When planning learning experiences, for example, the vast majority of educators–myself included, up until about three or four years ago–plan for the “neurotypical” student in mind and then make modifications and accommodations as needed. I don’t think it’s too much of a reach, though, to say that the vast majority of white educators plan for the white student in mind–and the more “woke” they get, the more modifications and accommodations they make for their Black, Indigenous, and students of color.

But what if we flipped this paradigm on its head? What if we took the main aim of the concept of Universal Design–with its roots in architectural and other design-based studies–and used it to plan for the learning experiences of those students who have traditionally been marginalized in American schools first?

As it turns out, there is a vast network of educators who already embrace the framework of what is called Universal Design for Learning (UDL), something that many of us learned about in our teacher training programs in the 1990s but have since forgotten or cast aside as a practical means of survival in a profession bent on increasing “achievement” (read: test scores). For those who don’t know, UDL is not a specific tool or text, but a set of principles and guidelines meant to help educators be proactive in their planning rather than reactive. And while, like most education initiatives that have gained steam in mainstream circles, it is blindingly white (as demonstrated by this roll call of staff at CAST, the nonprofit organization and research center that created the UDL framework), this will hopefully change as the voices of more educators like Tesha Fritzgerald and hashtags like #AntiracistUDL continue to be amplified by UDL’s most prominent proponents.

What I think many of these UDL-savvy educators understand is that the harsh truth in education–as in life– suggests that both disability and deficit are socially constructed notions that only exist based upon who or what is centered as the “norm.” Readers and writers who are what many in education flippantly label as “struggling” do, quite often, only struggle with alphabetic or print-centered notions of what it means to read and compose text. Multilingual learners whose first language is not English are often targeted as being “in need of intervention” because American schooling systems overwhelmingly privilege English at the exclusion of all other languages, even though approximately 20% of U.S. residents speak a language other than English at home.

To this end, I’m reminded of so many lessons I learned from Ann Clare LeZotte’s historical middle grade novel Show Me a Sign about the high incidence of deafness on Martha’s Vineyard beginning in the 18th century, and how those who were deaf were considered fully capable and independent, in stark contrast to communities whose residents were not largely deaf. And my teacher-self is compelled to ask, as many others have before: how much would deficit or “gap” thinking in education fade away into obscurity if we were to design learning experiences with a more diverse population at the center?

In our monthly virtual Think Tank meeting last evening, some of what TheEdCollab members* brainstormed around this idea included…

To be sure, I’m not trying to sell anyone on a monetized idea. Universal Design for Learning as it has been popularly conceived has some problematic components. However, I am hoping to appeal to folks with an ethical one. Using the concept of Universal Design as a lens with which we can intentionally plan and implement more inclusive educational experiences with fewer barriers –including those that are erected to favor white children–is so clearly what ought to happen in order to continue the work of making our educational practices (along with our system of schooling as a whole) more accessible and more engaging for all.

You don’t need reading glasses to “see” that.